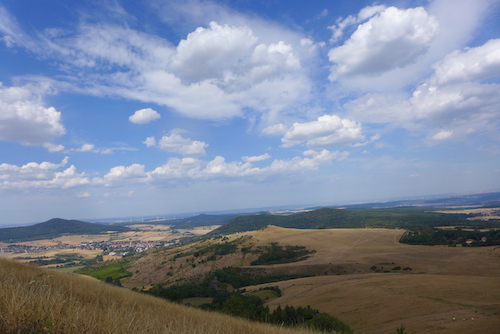 Zierenberg / Habichtswald. For almost two weeks now, the wind art exhibition "bewegter wind" has been attracting numerous visitors from all over Germany to Northern Hesse. Last Sunday there were performances by international artists at both exhibition venues - this year's motto "Clouds - clouds" was also the leading theme here. Thus Adriano Cangemi captivated the audience by making the metaphorical meaning of the cloud - freedom, lightness and boundlessness - immediately tangible for everyone: In front of an impressive landscape backdrop, the artist swung inexorably into the sky on his trapeze at a height of 10 meters - until his silhouette almost merged with the piling up clouds.

Reta Reinl, curator of the 9th wind art festival "bewegter wind", draws an extremely positive conclusion about the performance day - a highlight of the two-week open-air art exhibition. She says: "A total of four artists delighted the visitors with their performances. At the same time, a colourful nature park festival took place in the Habichtswald nature park centre, where even the smallest art and nature lovers got their money's worth!".

The performance team around Dutch artist Ton Oostveen also amazed the visitors: with his five musical kites, equipped with the latest technology, he elicited fascinating sounds from the air. Whether a gust of wind, a gentle breeze or a whispering wind - a wind concert with unique compositions was created before the ears of the visitors. The artist Marcel Lawrence, who was already present at the 'bewegten wind 2016', showed a cube cloud of shimmering aluminium, which rotated in the air on a kite. The performances of Raphaela Kula were also well attended: She invited the visitors to a joint cloud peeking tour. During a second walk, sand graffiti was created.

Eleven video works by international artists are currently making the Habichtswald Nature Park Centre a magnet for visitors: Ria Gerth from Germany, for example, shows in numerous fades the uniqueness of every moment that passes by like a cloud. Sören Herschel also creates a touching atmosphere with his work "Observation 0" - here blades of grass moved by the wind draw patterns in the sand. The Dutch artist Linda Lenssen has taken variability as her theme, symbolizing the piling up and disappearance of cloud formations in the sky: In her video, a woman balances on a rock - "On the edge" - and makes the sounding out of security and peace in the face of doubt and inner questions that sometimes cause us to totter, emotionally comprehensible. Dr. Marina Linares also deals with the basic conflict of permanence versus change - in her video one and the same cloud is placed in front of different landscape images.

The jury will announce the winners on Sunday

"Every artist has contributed in a unique way to the success of our wind art festival - so you can't speak of a winner", emphasizes Reta Reinl. The curator further explains: "Our experienced jury has selected the most outstanding works - these will be presented on Sunday, 2 September, from 5 p.m. in the Habichtswald Nature Park Centre and the winners of this year's wind art competition will be honoured! The jury includes art historian and curator of the Museum of Communication (FFM) Monique Behr, artist Achim Lengerer (Berlin) and artist Joachim Römer (Cologne). A total of 7,500 € has been announced as prize money. In addition - and this much can already be revealed - a special prize will be awarded this year.

Reta Reinl directs the attention to the sponsors and supporters who make the 'moving wind' and the prize money possible at all. "We would like to thank the district of Kassel, the municipality of Habichtswald, the Habichtswald nature park, the town of Zierenberg, the Kasseler Sparkasse, EAM, the Bundesverband Windenergie, the Stadtwerke Wolfhagen, art regio - SparkassenVersicherung and AGiL." And she adds: "In addition, a heartfelt thank you is due to the many people on site - whether farmers who provided exhibition space, helpers during the set-up weeks or the many people who provided private accommodation for our artists: This active support is simply fantastic - and it has shown that art releases positive energies and brings people together!

By the way: late-decided or passionate cloud-gazers still have the opportunity to visit the "Outdoor Exhibition" until the award ceremony next Sunday. Opening hours are not