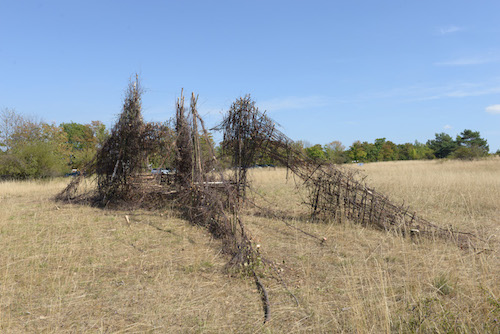 1st prize: "The suspension bridge in the cloud" by Aleksei Dmitriev (Russia)

A wooden sculpture, fragile and fascinating: the artist Aleksei Dmitriev collected branches and twigs in the Dörnberg nature reserve and created a sculpture from them. Its form appears as if it had been poured into the landscape - and offers the observer a constantly new impression from every perspective and from the most varied distances, both far and near.

The Russian artist's source of inspiration lies in his childhood: a memory of electric poles and wires, the tips of which disappear in a deep blanket of fog. This brings Walter Benjamin's spatial-cartographic concept of memory to mind. "Whoever has once begun to unfold the fan of memory will find in its folds something long forgotten," writes the German philosopher. As Benjamin describes it in his figure of the flâneur as a collector of everyday things and stories, Dmitriev also finds remnants and traces of branches broken off by the wind, animals, or people. From this material he designs an open and never-ending sculpture into the geography of the landscape. The folds of his childhood memories, the landscape as well as the spatial sculpture intertwine here.