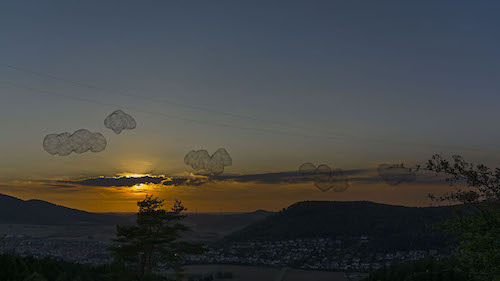 What makes looking at the clouds so fascinating? One reason is probably the constant change of the celestial formations, which creates a lot of room for fantasy and illusion. And just as clouds are constantly changing in correspondence with wind and scenic backdrop, the object ensemble by the Swiss artist Heinz Schmid is also highly dynamic and fascinating.

His cloud objects, installed in the landscape in an unusual way, are always presented to the viewer from new perspectives. Just as clouds only become visible through the scattering of light, the light metal objects appear through the movement of the viewer in ever-changing relationships between objects and surrounding geography. In keeping with the phenomenological description of the French philosopher Maurice Merleau-Ponty, the spatiality of the ensemble and nature only appears in a changing relationship to one another through the movement of the visitors. Thus Schmid dissolves the naturalistic form of the ensemble as clouds in favour of a complex perception of nature and art - an objective that Schmid already hints at in the title of his work "...Clouds over...".